> #All news > The Guardian: How millions of French shoppers are rejecting cut-price capitalism

The Guardian: How millions of French shoppers are rejecting cut-price capitalism

The movement is a response to the long-term squeeze that big retailers have been able to put on suppliers in many developed economies over the past two decades. The competition for space in supermarkets is so intense that farmers often find themselves accepting derisory prices for their produce.

In Paris last week angry farmers blocked roads and faced off against police as 1,000 tractors from across northern France tried to converge on the Champs-Élysées in a protest aimed at putting pressure on supermarket chains ahead of annual price talks.

Demanding an urgent meeting with President Emmanuel Macron and government action against falling supermarket prices, rising costs and cheap imports, unions said in some regions one in three French farms were operating at a loss or only just breaking even. 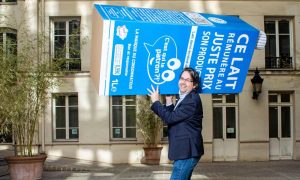 The basic assumption by supermarkets is that all consumers want competitively priced produce. The cheaper, the better. CQLP might have just rewritten that rule.

In just three years, CQLP has won over nearly 11.5 million French consumers – about one in five adults. It has also boosted the incomes of more than 3,000 farmers and manufacturers, all of whom benefit from the pledge emblazoned in big, bold capitals on the brand’s packaging: “This product pays its producer a fair price.”

“I have to say this doesn’t feel like a fad,” said Chabanne, 50, who talks with almost evangelical conviction about the movement. “I do think we’re talking here about a fairly profound shift in consumer attitudes – a realisation, essentially, that the big supermarket chains had forgotten what really matters.”

Unarguably, “a whole lot of consumers now want to behave more responsibly”, he said. “They would prefer, if possible, to buy healthy, quality food, produced ethically, transparently and with respect for animal welfare and the environment by people who get a fair price for it. And they’re willing to pay a bit more for that.”

C’est qui le patron?! is “basically about consumers both taking control of what’s on our plates, and supporting producers”, he said. “There will always be people, for all kinds of reasons, for whom price matters most. But there are also more and more who feel maybe slightly guilty when they shop for food – and would like to do better.”

The idea is not completely new, with echoes of the fair trade movement that rose to prominence towards the end of the last century.

The brand effectively applies the principles of fair trade, usually associated with developing countries, to a domestic market. It is a concept with proven appeal: roughly $9bn worth of Fairtrade products were sold globally in 2017, sourced from 1.66 million farmers, with 2,400 companies, including major multinationals, paying licence fees to their national Fairtrade chapters to use the mark on their products.

C’est qui le patron?! sees international potential in its brand. It is early days, but Eat’s my choice in the US, Wie is de baas? in Belgium, ¿Quien es el jefe? in Spain and, in the UK, The Consumer Brand are all now in varying stages of their development.

“Britain has exactly the same supply-chain issues as France,” said David Poussier, who heads the UK operation, which aims to have its first product questionnaires ready by mid-December. “Food retail is a massively opaque business, consumers are growing more and more aware, and many have real questions about what they’re buying.”

This newfound desire of consumers to make sense of what they eat – literally, to help create it – has an unarguable logic

He pictures the brand’s archetypal target customer as “perhaps the couple in their mid-30s, working parents, young kids, highly conscious of the climate crisis, the need to eat healthily, of animal welfare, single-use plastics in packaging, the plight of the farmer … but maybe unable to afford full organic. Well, we’re the answer.”

Poussier said he has had an overwhelmingly positive response already from UK producers – particularly smaller farmers and food-processing companies who maybe cannot sell all their output on the local market, but are wary of dealings with big supermarket chains.

To develop each new product, CQLP asks consumers to vote from a list of potential lines on its website: current options include salt, rice, mustard, olives and tinned tuna. Once a product is selected, consumers decide on its specifications, packaging and price by completing a multiple-choice questionnaire.

For CQLP potatoes, for example, consumers, armed with an online briefing on the basics of potato production, must choose where and under what conditions they want them grown and stored, whether they should be organic, what the sacks should be made of (plastic or paper) and the price the producer should get: market, break-even, fair or “permitting investment”.

Every decision is made by a majority of votes cast online, with the cooperative’s paid-up members, who set the key parameters and overall direction, each having one vote just like everyone else. CQLP covers its core running costs – relations with producers and retailers, quality control – with a flat levy of five cents on every euro earned.

Chabanne could ask for no greater validation of his idea than the fact that all bar one of France’s notoriously aggressive, commercially cut-throat supermarket chains are now convinced of CQLP’s approach and stock its products – and that some of Europe’s biggest food multinationals, giants such as Danone and Nestlé, are in talks to develop CQLP-label products based on the same core principles.

“It took a little while,” said Chabanne. “But in the end they got it pretty quickly. At the end of the day, we answered a lot of questions they were asking about consumer behaviour. Ultimately, this newfound desire of consumers to make sense of what they eat – literally, to help create it – has an unarguable logic. And the success of the products themselves did the rest.”

Back in France, Chabanne is working on the next move. CQLP already has an app that allows consumers to locate its products in nearby shops – and ask managers to stock them if they don’t. He now wants to go further, with another app that will allow users to scan thousands of non-CQLP products and check them against the cooperative’s standards, as assessed by volunteer panels of expert consumers.

Even if the process can necessarily only work with firms that agree to it, many – given the brand’s success – appear likely to do so. Long-term, Chabanne hopes the app will change big food’s behaviour. “They will learn clearly, unambiguously, what consumers want and expect of their products,” Chabanne said.

“It’s a logical next step, because what drives CQLP is this goodwill army of consumers, hundreds and thousands of active volunteer ambassadors, who share, inform, pass on, visit stores, talk to managers, hang out with producers – who, basically, have decided, together, that things have to change.”